CYANOKIT is being distributed by BTG as of December 15, 2021. To order CYANOKIT, please click here.

The product information provided in this site is intended only for emergency personnel and healthcare professionals in the United States.
The products discussed herein may have different product labeling in different countries.

Time Is of the Essence

Comprehensive treatment of acute cyanide intoxication requires support of vital functions. Airway, ventilatory and circulatory support, oxygen administration, and management of seizures should not be delayed to administer CYANOKIT.1

Randomized clinical trials in humans are not possible due to ethical considerations, therefore evidence in controlled trials of the effectiveness of hydroxocobalamin for the treatment of cyanide poisoning was obtained primarily from studies in animals. However, 4 open-label, uncontrolled clinical studies were conducted in known or suspected cyanide poisoning victims.1

A total of 245 patients received hydroxocobalamin treatment in these studies. Systematic collection of adverse events was not done in all of these studies and interpretation of causality is limited due to the lack of a control group and due to circumstances of administration (e.g., use in fire victims). Adverse reactions reported in these studies listed by system organ class included1:

A prospective, uncontrolled, open-label study spanning almost 7 years was carried out in 69 subjects who had been exposed to smoke inhalation from fires. Subjects had to be over 15 years of age, present with soot in the mouth and expectoration (to indicate smoke exposure), and have altered neurological status. The presence of cyanide poisoning, defined by a pretreatment blood cyanide concentration ≥39 µmol/L was confirmed in 42 of the 63 patients with evaluable data (67%). The median hydroxocobalamin dose was 5 g with a range from 4 g to 15 g.1,6

Following the administration of hydroxocobalamin, 50 of 69 subjects with cyanide poisoning (73%) survived.1,6

Two additional retrospective, uncontrolled studies were carried out in subjects who had been exposed to cyanide from fire or smoke inhalation. Subjects were treated with up to 15 g of hydroxocobalamin. Survival in these two studies was 34 of 61 (56%) for one study, and 30 of 72 (42%) for the second.1

A retrospective chart review over a period of 15 years was compiled by identifying 14 patients who had been exposed to cyanide from sources other than from fire or smoke (i.e., ingestion or inhalation). Subjects were treated with 5 g to 20 g of hydroxocobalamin. Eleven of 12 subjects whose blood cyanide concentration was known had initial blood cyanide levels considered to be above the lethal threshold.1,8

Following the administration of hydroxocobalamin, 10 of 14 subjects with cyanide poisoning (71%) survived.1

The ability of oxygen to access the cytochrome oxidase enzyme (present on the mitochondria inside cells) is essential to normal, life-sustaining cellular respiration. Cyanide poisoning may disable the body’s ability to use oxygen, so it can be fatal despite the amount of oxygen available to the body.1

Without treatment, exposure to a high dose of cyanide may result in death within minutes and may also cause central nervous system side effects, including altered mental status, parkinsonism, and personality changes.1,9

Studies show that the concentration of plasma lactate increases with the severity of cyanide poisoning and that hydroxocobalamin treatment results in rapid resolution of cyanide-induced lactic acidemia.2

The Components of Each CYANOKIT

Each CYANOKIT consists of1: 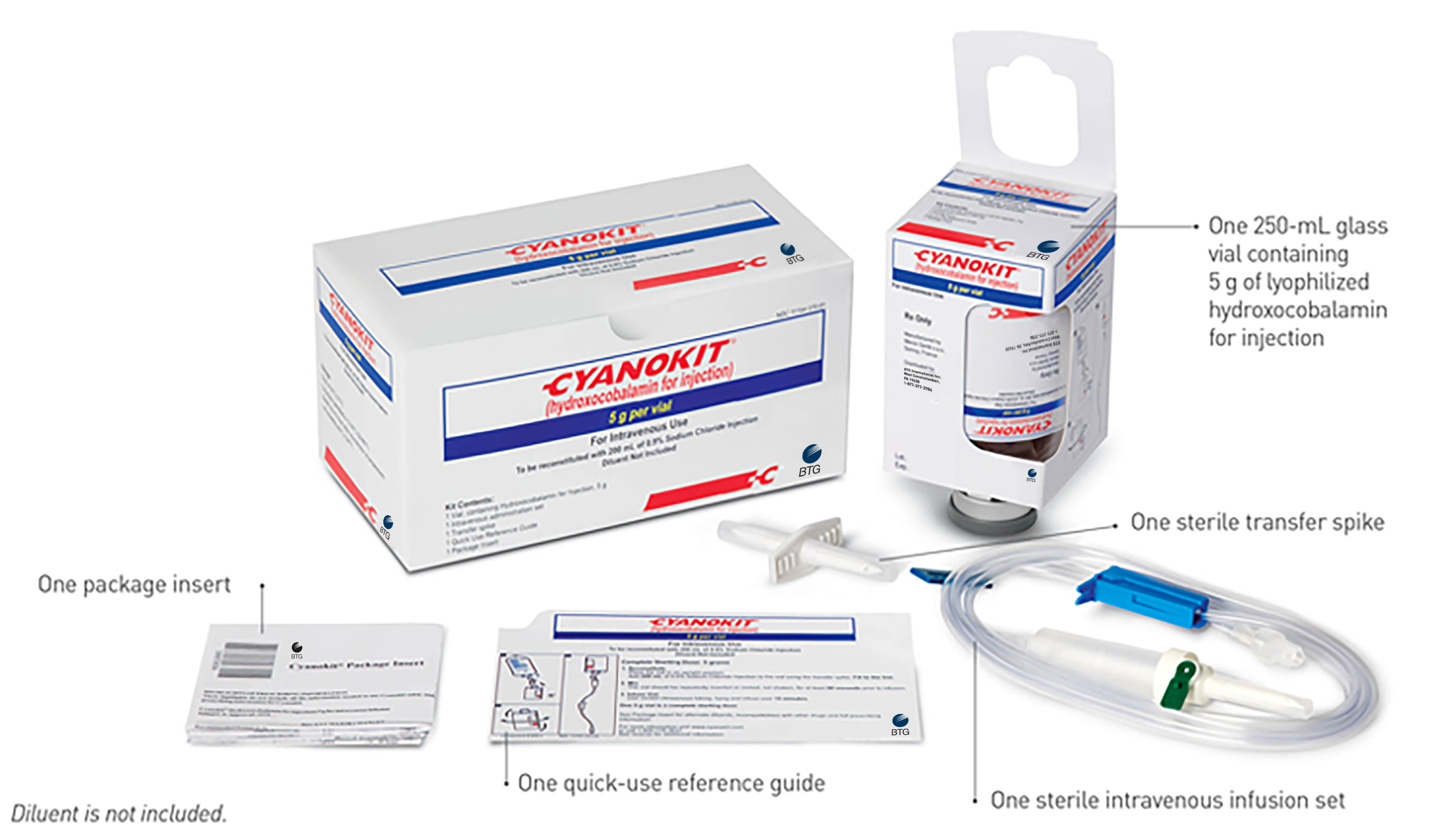 Dosing and Administration for CYANOKIT

*No safety and efficacy studies have been performed in pediatric patients. 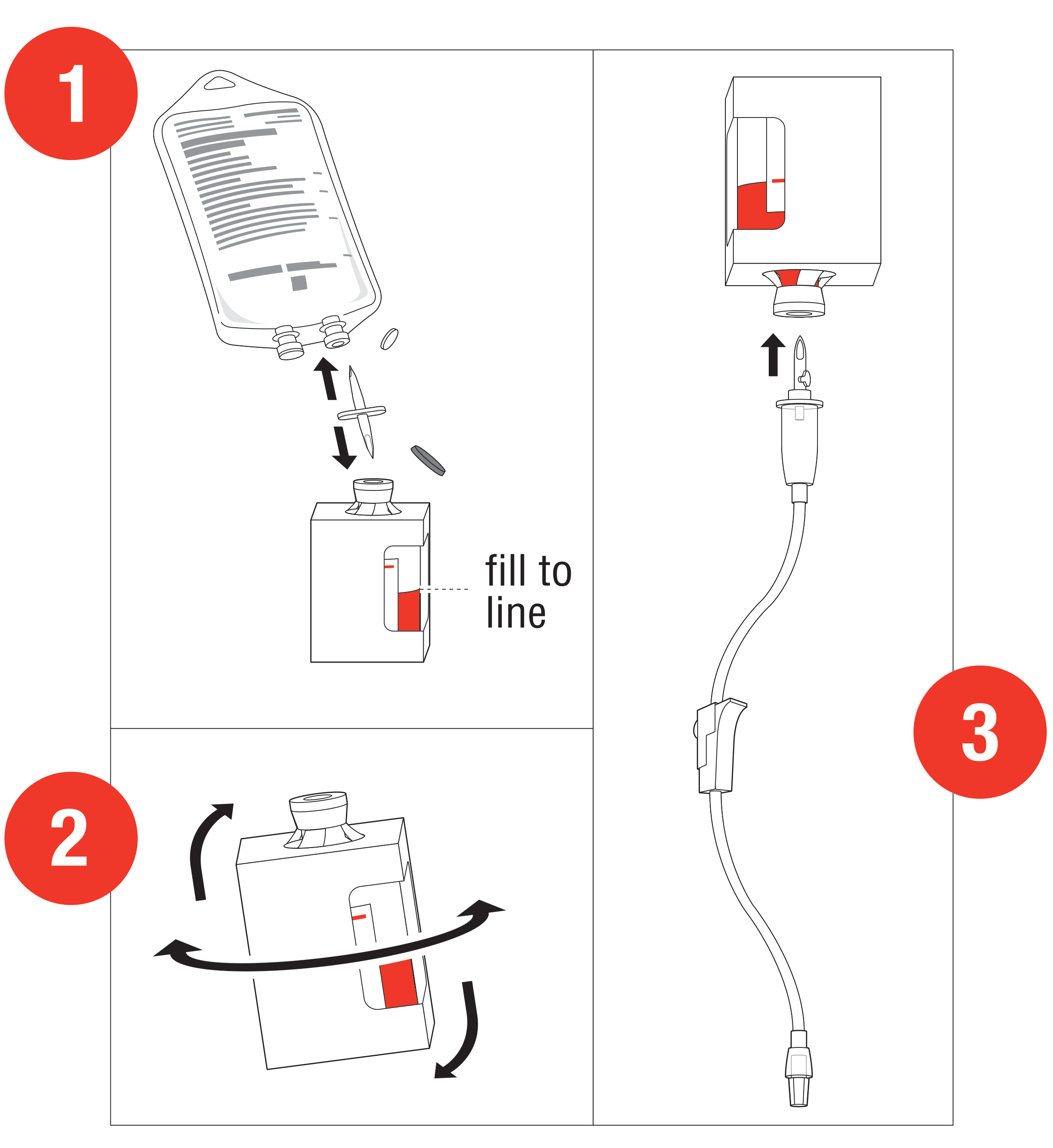 Simultaneous administration of hydroxocobalamin and blood products (whole blood, packed red cells, platelet concentrate and/or fresh frozen plasma) through the same intravenous line is not recommended. However, blood products and hydroxocobalamin can be administered simultaneously using separate intravenous lines (preferably on contralateral extremities, if peripheral lines are being used).

To Use CYANOKIT Properly, Follow These Important Storage and Handling Guidelines

Lyophilized form: Store at 25°C (77°F); excursions permitted to 15°C to 30°C (59°F to 86°F). CYANOKIT may be exposed, during short periods, to temperature variations of usual transport, transport in the desert, and freezing/defrosting cycles.

Storage of reconstituted drug product: Once reconstituted, hydroxocobalamin is stable for up to 6 hours at temperatures not exceeding 40°C (104°F). Do not freeze. Any reconstituted product not used by 6 hours should be discarded.

INDICATION
CYANOKIT is indicated for the treatment of known or suspected cyanide poisoning.
Important Safety Information and Indication
WARNINGS AND PRECAUTIONS

Risk of Anaphylaxis and Other Hypersensitivity Reactions

CYANOKIT is indicated for the treatment of known or suspected cyanide poisoning.
Important Safety Information and Indication
WARNINGS AND PRECAUTIONS

Risk of Anaphylaxis and Other Hypersensitivity Reactions